The process of obtaining ‘miraculous agitations’, as I’ve written before, revolves around chance occurrences.  From a purely intuitive standpoint, it’s hard to pin down the catalyst that transforms a vibrating apparatus from a ‘bone-idle-tone’ into inspirational ‘tone-drama’ (that is, the once-in-a-blue-moon complex and inspiring acoustic stuff).  It appears as a chance convergence of microscopic parameters: an imperceptible movement of some element suddenly causing an emergent state…

The cauldron is perhaps the paradigm of all this tone-drama-seeking malarkey.  In fact, it’s surprising that cauldrons aren’t used more often in improv gigs.  Objects may be placed in a vibrating cauldron and stirred until the much longed-for ‘tone-drama’ emerges.  The cauldron body would be resonated electromagnetically, and eventually, with enough stirring trials, there will arrive a point where a highly specific configuration is obtained, bringing about pulsing rhythms or harmonic progressions.

When I was angling to incorporate pseudo-cauldrons into resonant assemblies, the adage “beggars can’t be choosers” manifested itself in the galling fact that dishes and bowls receptive to magnetism are very hard to find.  If you walk into a shop, all the stainless steel bowls will be non-magnetic.  This is frustrating, as many of the most resonant bowls will not be suitable for resonating via the electromagnetic field method (a non-contact method of resonating).

Looking in bins and trade waste containers can yield older steel bowls, where the steel was treated differently during manufacture, thus retaining its ferric virtue and allowing for EM resonation.  Although, these are rare.

Whereas in the past the poverty and unemployability that necessitated my dumpster-diving actions lent a teeth-gnashing restrictive atmosphere, it’s now obvious that this impoverished flâneur approach embraces chance happenings: a good thing.  One day, a wok presented itself.  Woks can be easily adapted to resonate.  When a wok handle is removed, woks resound like Tibetan bowls…  And they’re always (in my experience) responsive to magnetism too.  Woks are also somewhat hard to find, but they’re easily spotted, at least, whether in bins, car-boot sales, or vistas of ruin.

When a resonator coil is fixed in proximity to a wok’s rim, several harmonics can usually be obtained.  The most harmonically rich woks happen to be Ken Hom woks – this particular brand was the heaviest/densest I’ve so far found (the chrome handles of certain Ken Hom wok lids also make excellent subharmonic-generating objects to place inside woks).   The polarities and phase of the resonator coil / pickup coil combo can be arranged so that a descending scale of harmonics can be elicited by moving the pickup anticlockwise around the rim, on the right-hand side of the resonator (as shown in this scrawling).  When subharmonic ballast is added, a veritable sonic stir-fry is formed… with all the potency of the paradigmatic cauldron: thaumatacoustics in action. 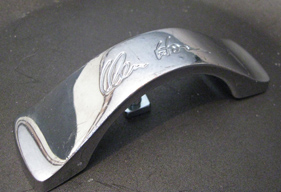 So far, I have found four woks.  It is interesting to note that the resultant chords obtainable purely from the woks themselves – without adding objects inside – are chords of chance provided by the trade waste bins.   A convergence of people all deciding at a certain time to discard their woks resulted in this very specific chord.

I recorded a short and unpolished study simply to display aspects of this chord. (Please excuse the unskilful pickup collisions)…. 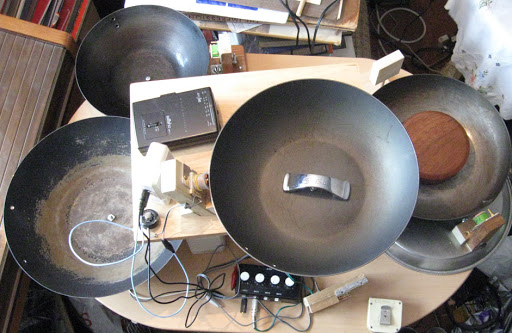